Ophiocordyceps sinensis is known in English colloquially as caterpillar fungus or by its more prominent names yartsa gunbu, or dōng chóng xià cǎo or Yarsa-gumba or Yarcha-gumba, or Keeda Jadi.

The world's most expensive fungus is known in Tibet as yartsa gunbu and has become a status symbol in China. 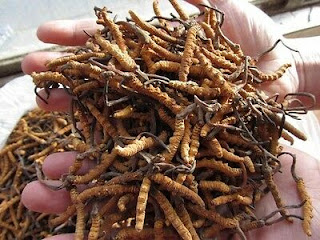 In Himalayan villages, locals use this special mushroom as an energy pick-me-up.

But healers say it also:

• And can cure every illness, including cancer.

They said the Tibetans call it Yartsa Gunbu, but this medicinal mushroom is better known as the “caterpillar fungus” or Cordyceps sinensis.