This fungus forms large fan-shaped mushroom heads that often fuse together in masses at the base or on the roots of broadleaf trees.

It can invade the core of the tree as a parasite causing extensive decay. 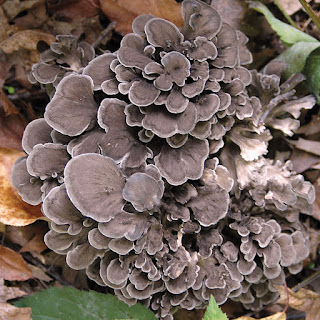 It is often called ‘Hen of the Woods’ or ‘Sheep’s Head’ while it is more often called in Japan, Maitake, which means ‘dancing nymph’.

In the early stages, it is sought after for its delicious taste and excellent aroma.

Previously, it was only collected from the wild and, consequently, was highly prized and priced.

Since the late 1970s, it can be artificially cultivated on logs or sawdust mixtures and now many thousands of tons are being grown in Asia and more recently the USA.

In traditional Chinese medicine, it has been used for improving spleen and stomach ailments, calming nerves, and treating hemorrhoids.

Maitake is a component of a wide range of Chinese medicines.

It is interesting to note that the β-glucan fractions from this mushroom are now being used by over 3,000 health.

professionals in the US for the prevention and treatment of :