This fungus is widely known as the Jew’s ear (a contraction of Judas’ ear), wooden ear, or tree ear and in Japan, Kikurage.

They are facultative parasites growing on trunks of many broadleaf trees or on dead wood. 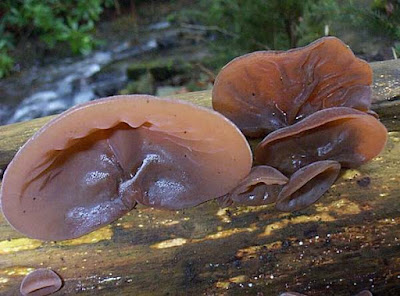 The fruiting body is gelatinous, elastic, rubber in texture and widely used in Chinese cuisine.

However, it is an acquired taste! It is widespread in the United States, Europe, and Asia.

Historically, it has been used in China both as a food and medicine.

It is particularly useful for stopping pain and bleeding and is regularly prescribed in traditional Chinese medicine to treat haemorrhoids and excessive uterine bleeding.

Kikurage has a high content of indigestible polysaccharides or dietary fiber.

Pharmacologically, the polysaccharides have been used as immune toxins, anticoagulants and to lower cholesterol.

Owing to this possible teratogenicity, it is recommended that Auricularia extracts should not be taken by pregnant or lactating women and those planning to conceive.

This is believed to be one of the first mushrooms to be artificially cultivated in China.

Now extensively cultivated in Asia for culinary and medicinal purposes.

As yet there is no cultivation practice in the West.