It is a culinary as well as a medicinal mushroom, giving a hint of seafood, crab, or lobster flavor. 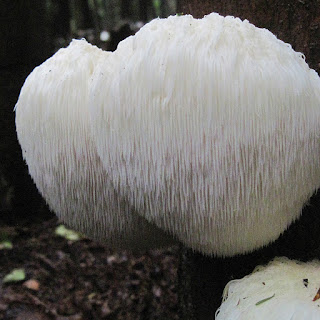 • Description: The mushroom is 2–8 inches across. Its white, icicle-like tendrils hang from a rubbery base.

• Habitat: Found throughout the northern hemisphere in Europe, East Asia, and North America. The mushroom favors dead or dying broadleaf trees such as oak, walnut, and beech.

• Active ingredients: Polysaccharides; fatty acids (Y-A-2); hericenons A and B, and hericenons C, D, E, F, G, and H. The mycelium also contains a group of diterpenes called erinacines that mimic the nerve growth factor; one erinacine is an opioid (useful for pain control).